HOW TO LIVE UNCONVENTIONALLY WITH JULES SCHROEDER 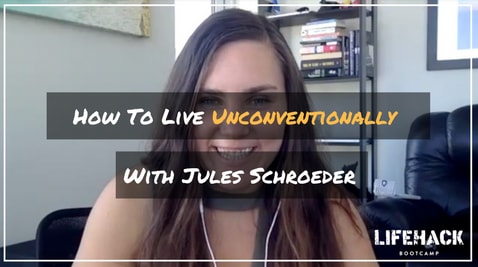 She’s BACK by popular demand!

Jules was one our Summit speakers earlier this year, and her message resonated with our audience so profoundly that her interview was one of the top 5 most watched videos of the entire event.

Jules writes for Forbes.com and hosts an extremely popular podcast for Forbes 30 Under 30.  She’s the founder of The Unconventional Life community which features people designing unconventional lives outside the norm — and often way better than expected!

This woman is a serial female entrepreneur, an outdoors woman, a thought leader, and a musician who is right now in the studio cutting an album (what!). Just last month she was named one of the top 27 female entrepreneurs most likely to CHANGE THE WORLD by Inc magazine.  (And she was ranked #1 in that list by the way!)

We’ve had the opportunity to work with Jules, and we found that behind the curtain she’s just as impressive as in front.  Jules has created incredible systems and procedures to be one of the most powerful executors we’ve seen.

Currently Jules is creating live events all over the world for entrepreneurs to connect and learn how to make their freedom lifestyle a reality, which is how WE met Jules at her event in Bali.  We loved it so much, we joined her in her event at a castle in Italy this summer (yep you read that right), and we’re signed up to speak at her upcoming event on a private beach in Nicaragua.

She’s back with us today, sharing her latest insights into how she gets massive results while staying incredibly excited about everything she’s working on (28 min):

She’s also giving first access to her private Nicaragua event to the Lifehack Bootcamp community.  This event, true to form, is incredibly unique.  From what we’ve heard, attendees will be shuttled from the airport on a seaplane to the private beach.  Lodging will be in treehouses situated in the beachside jungle, and the speaker lineup is incredible.

If Jules’s message resonates with you, especially for those of you going through a transition right now…

Then click below to apply to come with us to Nicaragua.  Jules’ events sell out fast and she already has over 30 of the 70 spots spoken for!  Last time, she had over 300 applicants and she’s anticipating even more this time.

Mention that you’re part of the Lifehack Bootcamp community to accelerate your application process.