THIS TECHNIQUE IS MAKING MEETINGS IRRELEVANT 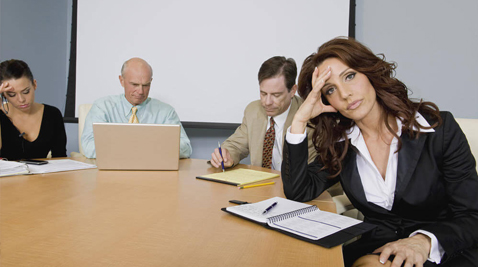 Originally published on Influencive.com, the media source for unconventional thinking and influential minds.

“Meetings suck up so much of my time, I’m finding it hard to get real work done,” my client, who is a VP at a digital media network, told me.  “A good three-quarters of my time in the office is spent sitting in meetings, so I have to squeeze real work in between.”

Meetings were taking up so much of her time that she was waking up early to get work done, staying late, and working weekends just to stay afloat with the real work she had to do.  “Having this many meetings at my level is par for the course. It’s just frustrating that a lot of the time spent in meetings is a complete waste of time!”

Then she asked me how much time I spent in meetings.

I explained that I used to be in her position.  It felt like the day would be almost over before I had a chance to sit down and get real work done.  But now, I hold just one 30 minute meeting with my team per week—which really is so that we can connect on a personal level.

My client was shocked.

Office environments have traditionally orbited around meetings.  Meetings were designed to be a way to effectively communicate information and make crucial decisions to move the business forward.

But they have devolved into a time suck of posturing, making excuses, and talking in circles instead of making decisions.  Only 12% of executives believe their top management meetings consistently produced decisions on important strategies, according to a 2003 report from Marakon Associates and the Economist Intelligence Unit.

MEETINGS ARE GOING THE WAY OF THE DINOSAUR

There’s a new breed of people for whom a new technique has made most of their meetings obsolete.  These are people who are willing to challenge the status quo so that they can magnify their productivity and impact in the organization—and work shorter hours!.

Screencasting, the technique of recording your laptop screen along with the audio of your voice, is quickly gaining popularity at small companies and large conglomerates alike.  It eliminates the need for most meetings entirely, or drastically reduces the time you need to spend sitting down together.

It’s the best combination of an email, a voice message, and a video.

HERE’S HOW IT WORKS

You download a screencasting app, such as Snagit ($49.95, available here) or Screencastify (free on the Chrome web store here).

Then you would start a new screencast and record all or part of your computer screen.  Start talking, as if you’re leaving someone a voice message on their phone, and explain what you want your recipient to understand.

Finally, stop the recording. The output is a mp4 video with a visual of your computer screen, along with the sound of your voice.  This mp4 can be automatically uploaded to your Google Drive, so that you can share the screencast with your recipient in one simple link.  Your recipient can then send a screencast back to you if needed.

Previously used to replace lengthy emails, screencasting is quickly replacing in-person meetings as well.  It is so effective because it forces both parties to communicate clearly, in complete ideas.

The main resistance point I hear from clients who are thinking about using screencasting is that it’s one-sided. Only one party can be talk at a time, which means there is no back-and-forth dialogue in real time.

But this con actually turns into a pro because it forces both sides to prepare beforehand and deliver complete ideas, rather than shooting from the hip.  It forces the recipient into listening mode because they don’t need to think of an immediate response.

WHICH TYPES OF MEETINGS CAN BE REPLACED BY SCREENCASTING?

Not all meetings are created equal.  There are seven primary types of meetings, and while screencasting is most effective at replacing 1:1 meetings, there are many ways you can use screencasting to augment the time you spend in most meetings.

SOME MEETINGS CAN BE TOTALLY REPLACED

MEETINGS THAT CAN BE PARTIALLY REPLACED

MEETINGS THAT CAN’T BE REPLACED

There you have it—massive amounts of time can be freed up immediately by using screencasts.  Some meetings are a combination of some of the above categories, but usually the primary purpose of a meeting fits into one of these types.

And once you get hooked on screencasting, there’s no going back.  Our clients say screencasting is one of their biggest time—and frustration— savers.

Kelly Janes, a small business owner who runs a web design company from Oregon, told me, “I’ve started creating videos for folks instead of walking them through something over the phone. The other day, a client asked how to do something I had recorded previously—like  six months ago—and I was able to send her the video link. Very cool!”

GET STARTED WITH SCREENCASTING NOW